Our team of dedicated eye health professionals is here to serve you. We combine extensive knowledge in the field of optometry with a passion for helping people solve their vision problems. It is our mission to create a friendly and professional atmosphere that you can rely on for all of your eye health needs 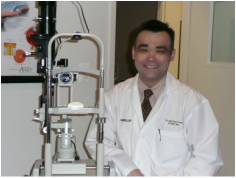 Dr. Sweetnam earned his Bachelor’s of Science Degree in Chemistry from Virginia Commonwealth University. He always had a fascination with the eyes in small part due to his own (lazy) eye surgery when he was 9. Dr. Sweetnam attended the Pennsylvania College of Optometry where he earned his Doctor of Optometry Degree in 1992.

After graduation, Dr. Sweetnam received a commission as a Lieutenant in the Medical Service Corps of the United States Navy. After nearly seven years on active duty, Dr. Sweetnam decided it was time to open his own office, and in January of 1999 he opened in the Tysons Corner Center in Mclean, Virginia.

After three years there Sweetnam moved his office to its current location in Burke, Virginia. 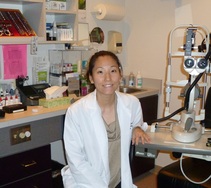 Dr. Chang is originally from the Norfolk area and attended the University of Virginia majoring in Cognitive Science. She attended the Pennsylvania College of Optometry now known as Salus University. Dr. Chang specializes in the treatment and management of ocular disease and fits all types of contact lenses. Her experience includes rotations in Pediatrics, Vision therapy and Ocular Disease at Walter Reed Army Medical Center and Fort Belvoir Community Hospital. 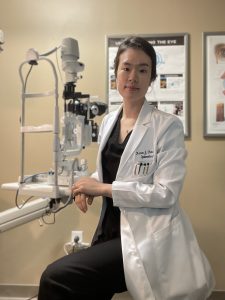 Dr. Karen Kim was born in Buchon, South Korea and immigrated to the United States where she was raised in Northern Virginia. She is bilingual in Korean and English. She attended Virginia Tech and earned her Bachelors of Science Degree in 2013. She then went on to attend Salus University (Pennsylvania College of Optometry) and graduated in 2019 earning her Doctor of Optometry Degree.

She worked in Optometry before attending Optometry School as an assistant and specialized in Ocular Disease and Low vision during her career as a student.

We will do our best to accommodate your busy schedule. Request an appointment today!